How can I be sad when I have breakfast, lunch, and dinner?
Recent Posts | Read from the beginning | About
Showing all posts filed under: green beans
<< Previous

My mind has been so distracted about work that I haven't been able to really give this blog much thought. I'm even eating out more, and my body is not happy with that. Anyway, I am still cooking regularly, so I feel like I should at least update this with pictures every so often.

I really like getting bagels from Giant Eagle, which means I also end up buying cream cheese, but one block of cream cheese is just so much cream cheese that I end up with lots of leftover cream cheese. So then I look up recipes with cream cheese, and for some reason, it's always just a bunch of pasta. This was good though. I'd make it again, but I probably won't put it in my "go-to recipes".

I also bought a bag of Poblano peppers from Giant Eagle because I needed one for that enchilada recipe I made a few weeks ago. What was annoying was that I only needed one pepper and I had to buy five because Giant Eagle only sells these in bags, and I did not want to take the extra ten minutes to trek to Whole Foods. So I looked up Poblano recipes and I came across hummus. I love hummus (as I love chickpeas), but store-bought hummus is usually so bad. The problem with making hummus though, is that I have to take out my food processor, which is a pain in the butt because it's annoying to wash, and it takes me forever to figure out how to put it back in the box. But hey, I have it, so I really should make use of it more often.

This hummus was delicious, but it really could have used a second Poblano pepper. I'll have to make hummus more often, as it's a great healthy snack that I can bring to work. Plus, what else am I gonna use my jar of tahini for?

Sometimes I eat so much pasta and tacos that it makes me really miss Asian food. I also feel like I need more vegetables in my system, and this is one of my favorite dishes to order at the local Chinese restaurant. We actually made this once when my sister was here! I figured I'd try this out on my own, and it turned out to be a super oil-splatter-y mess, but it did taste good! Next time I need to be better about really drying the green beans before throwing them into the pan. I also really should have used a larger pan. This is going to go into my "things I want to cook for my mom or dad when they visit" list.

More Asian food! I was just browsing recipes and I stumbled across this, and the picture looked really good, so I wanted to make it myself. Of course, when I made it, it didn't look nearly as good as the original recipe's picture. The marinade was delicious, but I still haven't quite gotten the hang of using my cast iron skillet. I was supposed to let the beef really brown, but it wasn't quite doing that. There was also so much marinade, and I probably could have cut it in half. I also should have cut the pieces of beef much much thinner. I'll have to try this again sometime.

Now this is one of my go-to recipes. Of course I still haven't taken a decent picture of it yet. What's nice about this dish is that I can pair it with whatever starch I want. Rice, pasta, or bread all work really well. And I just happened to have a whole take-and-bake baguette sitting in my freezer.

With Aldi now stocking pizza dough for less than $1, making pizza is really convenient. Especially because whenever I buy shredded cheese, it comes in these giant bags and I never know what to do with all of it, so I snack on it. I'd definitely rather be cooking with the cheese instead. Tomatoes are also one of my favorite pizza toppings (tomatoes, not tomato sauce). I should have put more green onions on this, but I totally forgot about them until the last minute so I awkwardly placed them in-between tomatoes at the end.

I should really buy a round pizza dish so I can actually make it circular next time. Oh, and maybe a pizza cutter.

So Aldi sells frozen salmon at less than $4 a pound, which may seem questionable, and that's why I've never bought it before. Until now. I needed to do something with that other $1 bag of green beans, and I really like this Sesame Glazed Salmon and Green Beans recipe from Budget Bytes.

The recipe is described as "faster-than-takeout", but I don't know about that. I always buy salmon with the skin on, and for some reason my local grocery store doesn't de-scale the salmon. So I usually end up trying to de-scale the fish myself which turns into a flailing mess. But Aldi's bags of frozen salmon are completely de-scaled! And cut into individual sized portions! So much easier.

However, this attempt was still kind of slow, since we cut the green beans diagonally. My mom always cut them this way, and it really helps the flavor soak in. It is a lot more work though.

It is a little odd that the recipe calls for 2/3 lb of salmon and 2/3 lb of green beans. We just used 1lb each. We also made more sauce, and I think we should have stuck to the amount in the recipe, since that has way more sauced than needed. I'd also put less sugar in next time.

I sprinkled furikake on my rice.

Aldi frozen salmon definitely isn't as good as the ones I buy not-frozen, but I think it's totally worth it for the price.

Lately my meals have been inspired by random foods that are on sale at the grocery store. I decided to get some extra chicken breast (in case I needed a little more for that pizza), and it was on sale for $1.48/lb which I figured was a decent price. I also saw these 1lb bags of green beans for $1 each, and I impulse bought two of them.

I used two Woks of Life recipes. With the green beans, I decided to make Sichuan Dry Fried String Beans. I ordered this at a local Chinese restaurant once and they were delicious. They were also like $10, so when I saw that Woks of Life had a recipe for it, I had to try it.

Originally, I had intended to use both bag of green beans, but we ended up saving the second one for a different recipe. But that's why there's so much pork. I think I'll use a lot less pork next time, or even omit it completely. 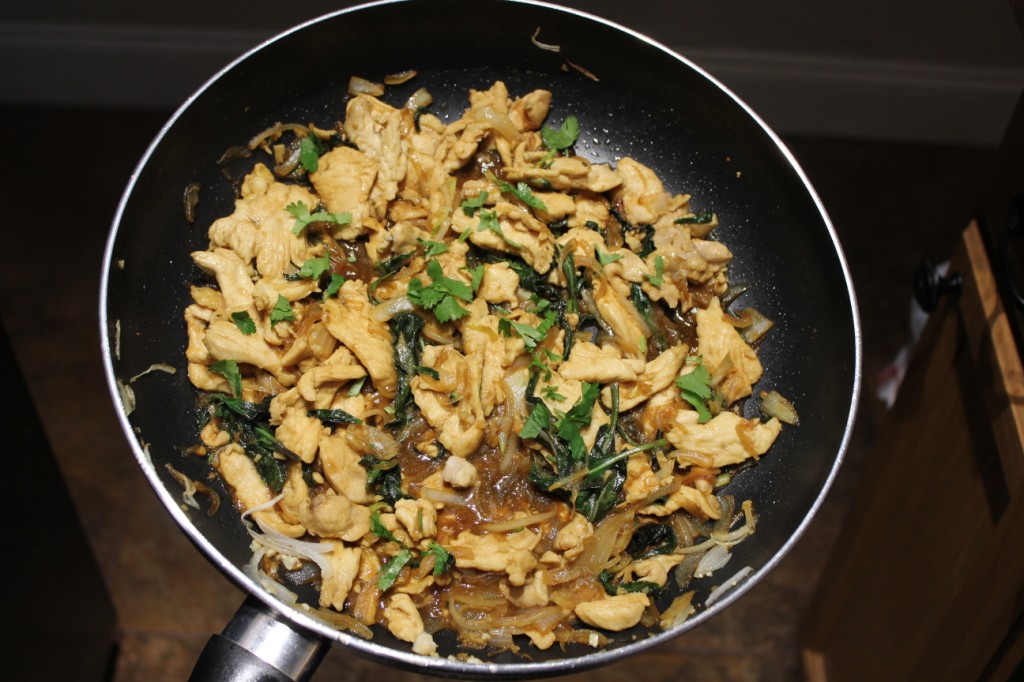 We also made Thai Chicken Stir-fry with Basil and Mint. Except we didn't use mint. This had a very strong fish sauce smell, which is great, since I love fish sauce. I probably should have doubled the basil since I didn't use mint. 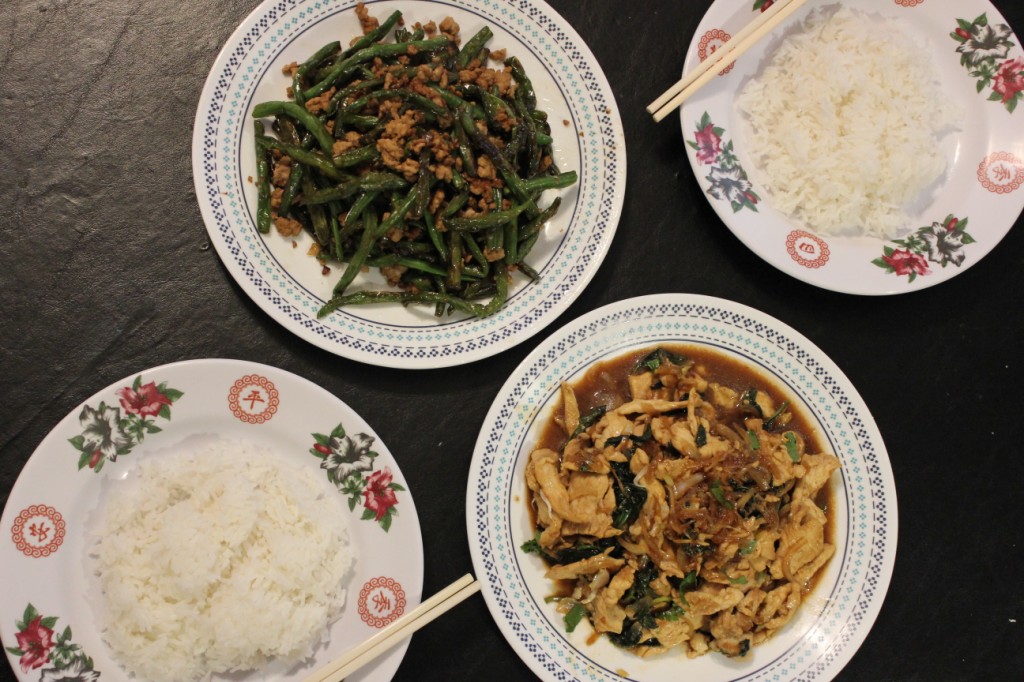 So delicious and way cheaper than takeout