...and everywhere else in my life
Recent Posts | Read from the beginning | About
Showing all posts filed under: yellow jasmine rice 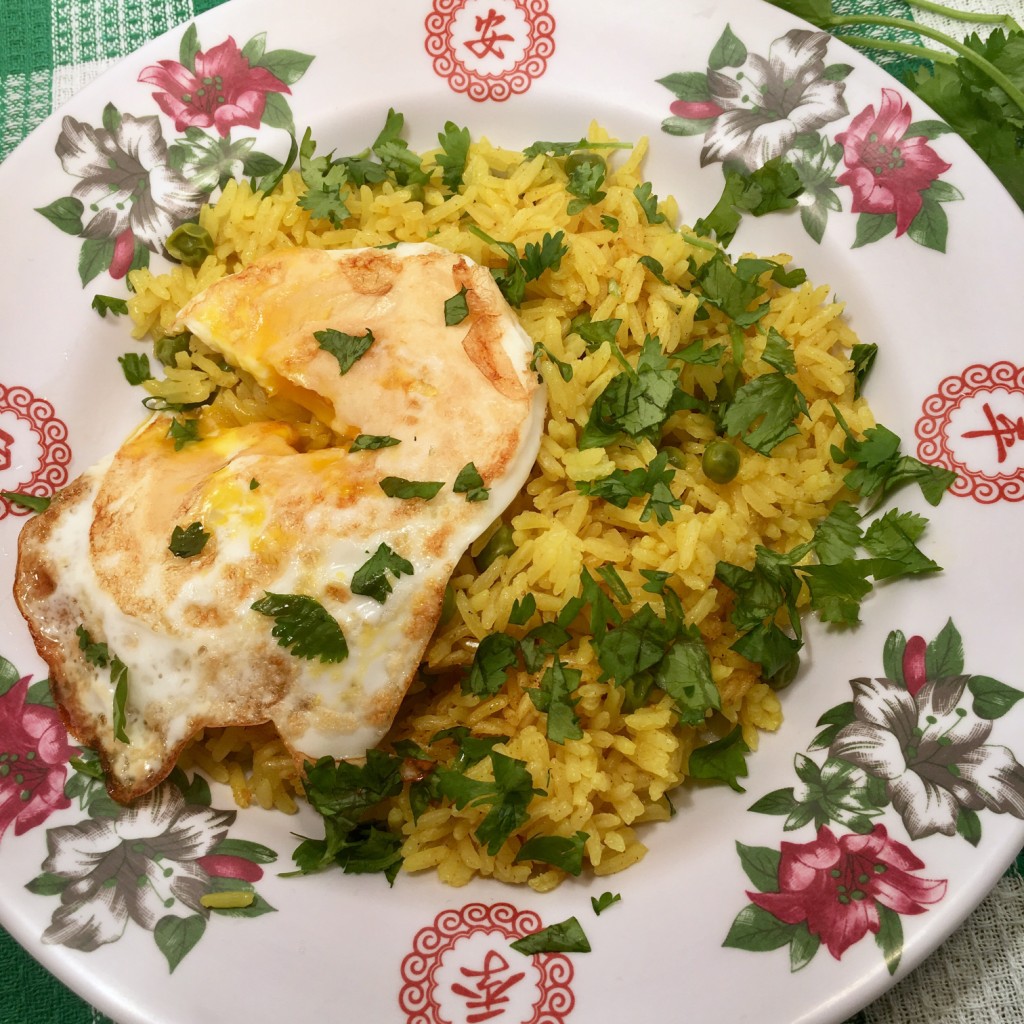 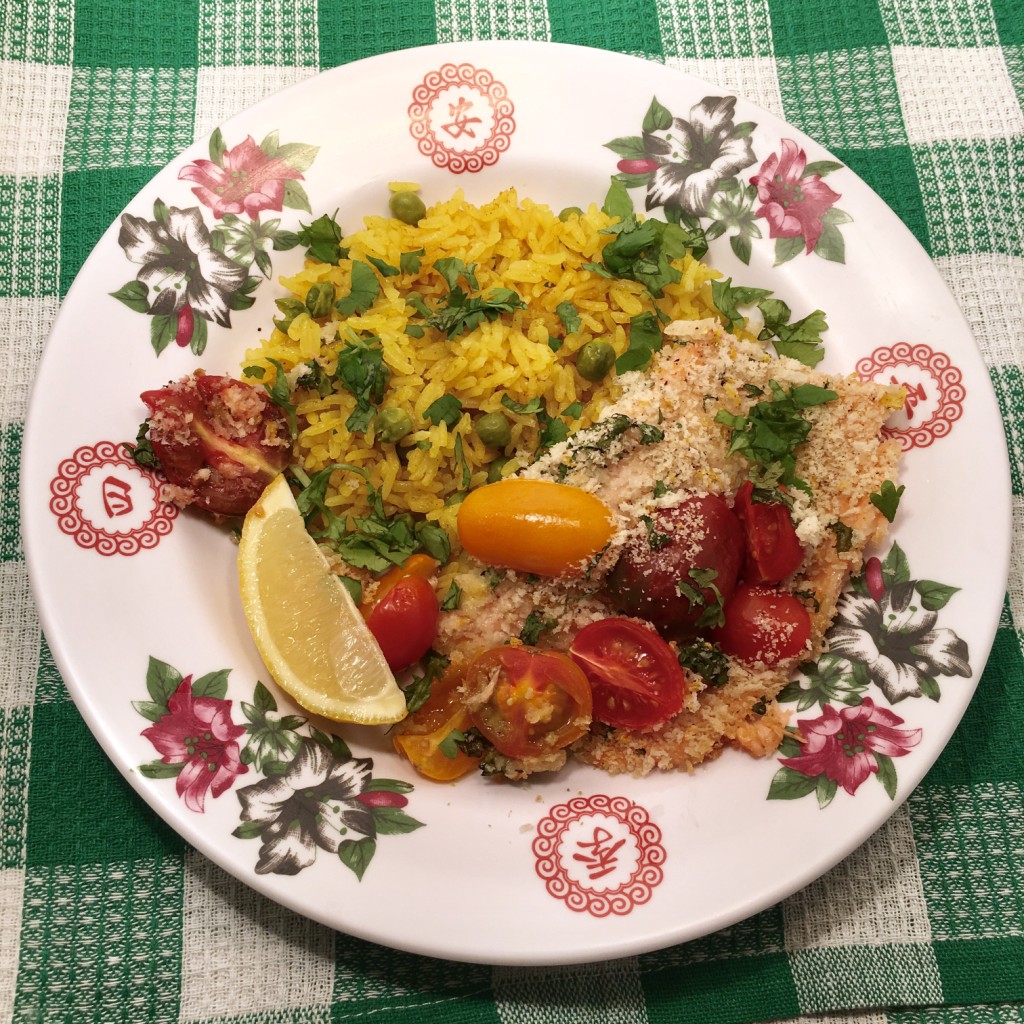 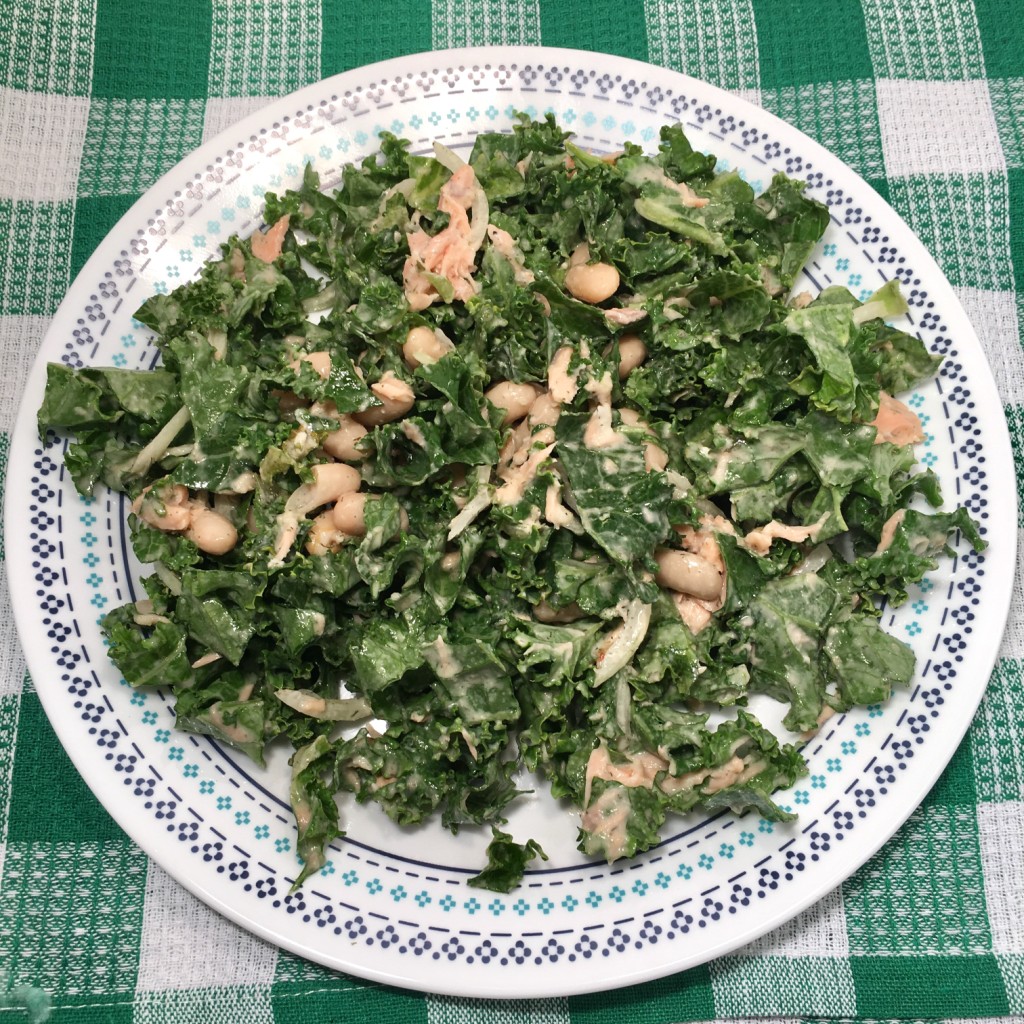 What I made this week:


When my sister was living with me, I was cooking almost every day. We kept cooking and cooking, and it seemed like we had so much food, but whenever I took a break from cooking for one day, it's like all the food disappeared. Well, I had this crazy realization this week that when I'm by myself I could cook three dishes during the weekend and then not have to cook at all during the week.

I know, that's what meal prepping is. But when people say they meal prep, I always envision them cooking two dishes on Sunday and then dividing everything up into individual portions in tupperware containers. Which sounds boring. I like to make every meal feel like a special accomplishment.

And you know what I accomplished this week? I only spent $16 on groceries! On the flip side, I also ate out four times, but one of those meals was on my company's dime. 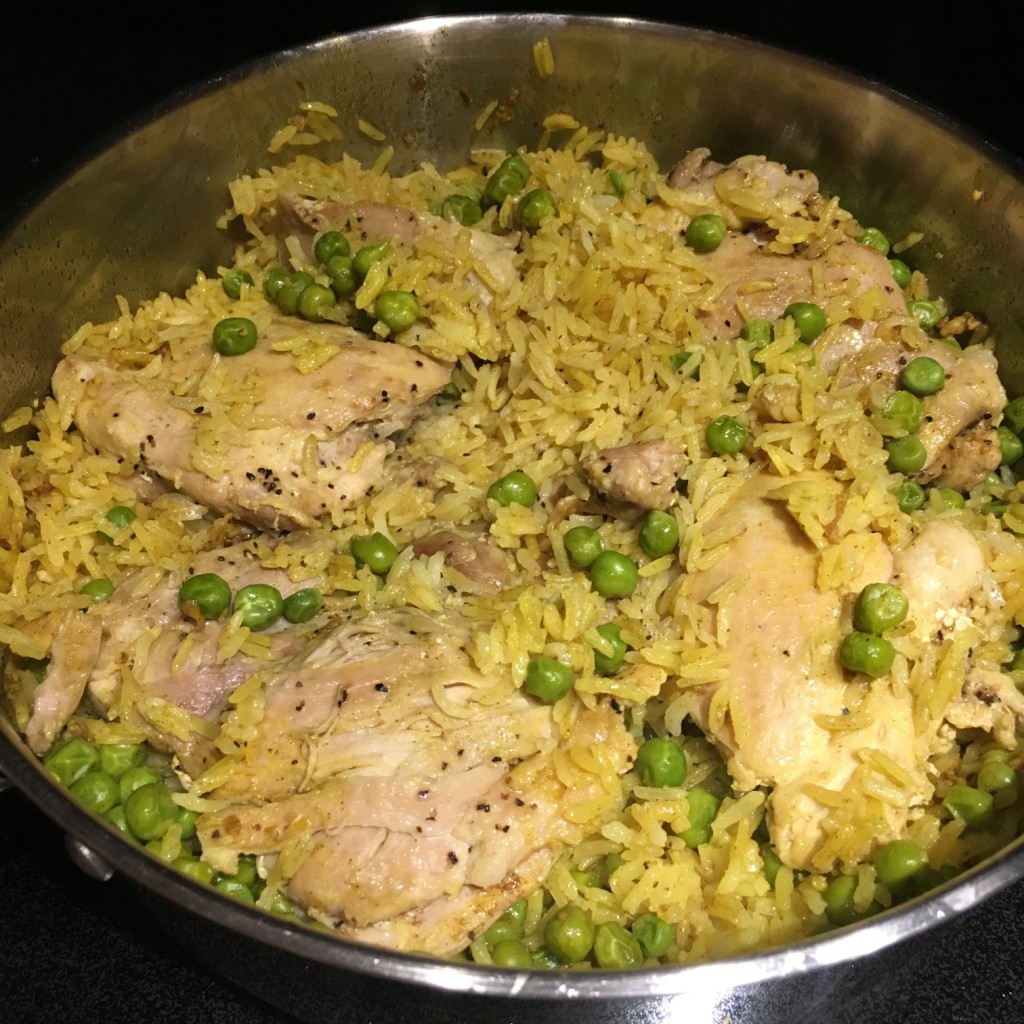 I'm trying to make sure I include some low effort meals that will last me a while. This chicken rice dish requires very little chopping, and I can make it last six meals. With pasta, I try to not make it last so many meals because I get sick of it easily, but this rice dish still tastes great on the sixth day in a row. 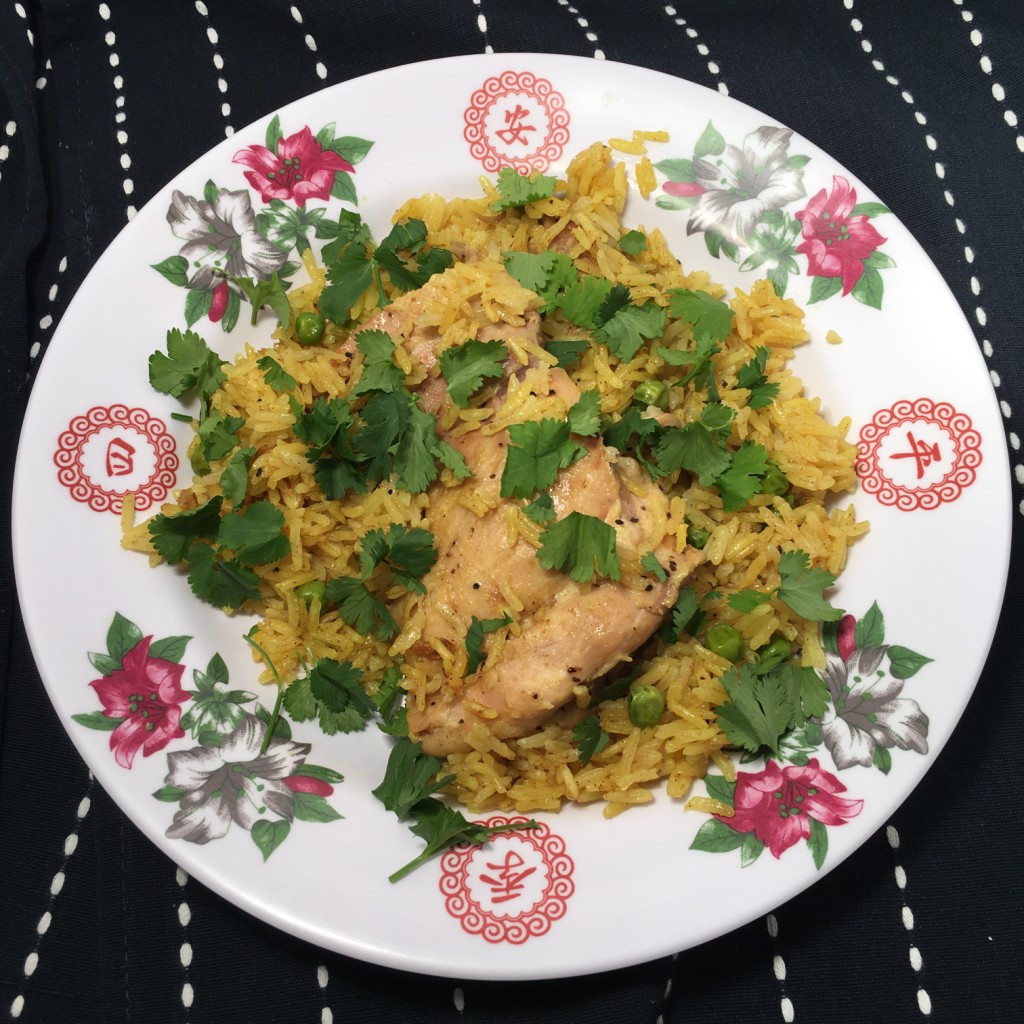 What's nice about this dish is that I can split up the rice and chicken, and then use those individual parts for other meals. I saw asparagus on sale at Aldi for $1.49/lb, which usually isn't that great because Aldi tends to stock suuuper skinny asparagus sticks, and who wants that? But this time the asparagus actually looked decently sized! 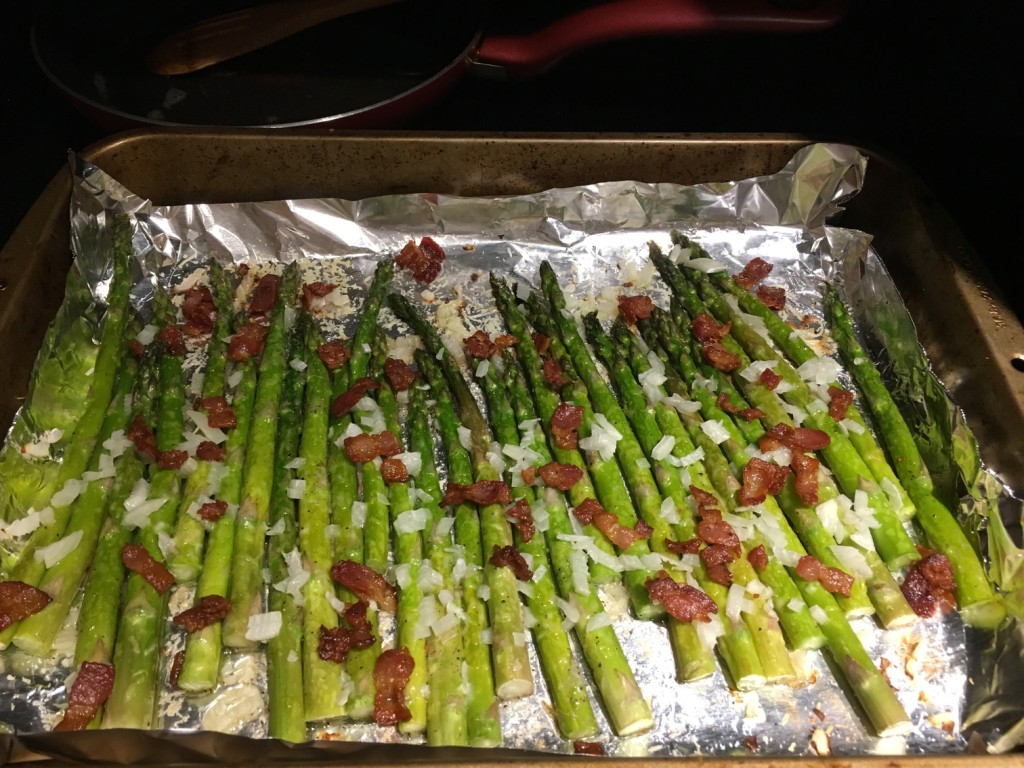 I actually made this same asparagus recipe about a month ago when my mom visited, but it didn't quite turn out so well since I was flailing in my kitchen trying to cook three things at once. This time I could just focus on asparagus. The recipe calls for shallots, which I replaced with onions because no one on a budget should ever buy shallots. The recipe also said to cook these for 20-25 minutes. That is way way way too long. I had these in the oven for about 12 minutes and I still think they were in there for a tad too long. 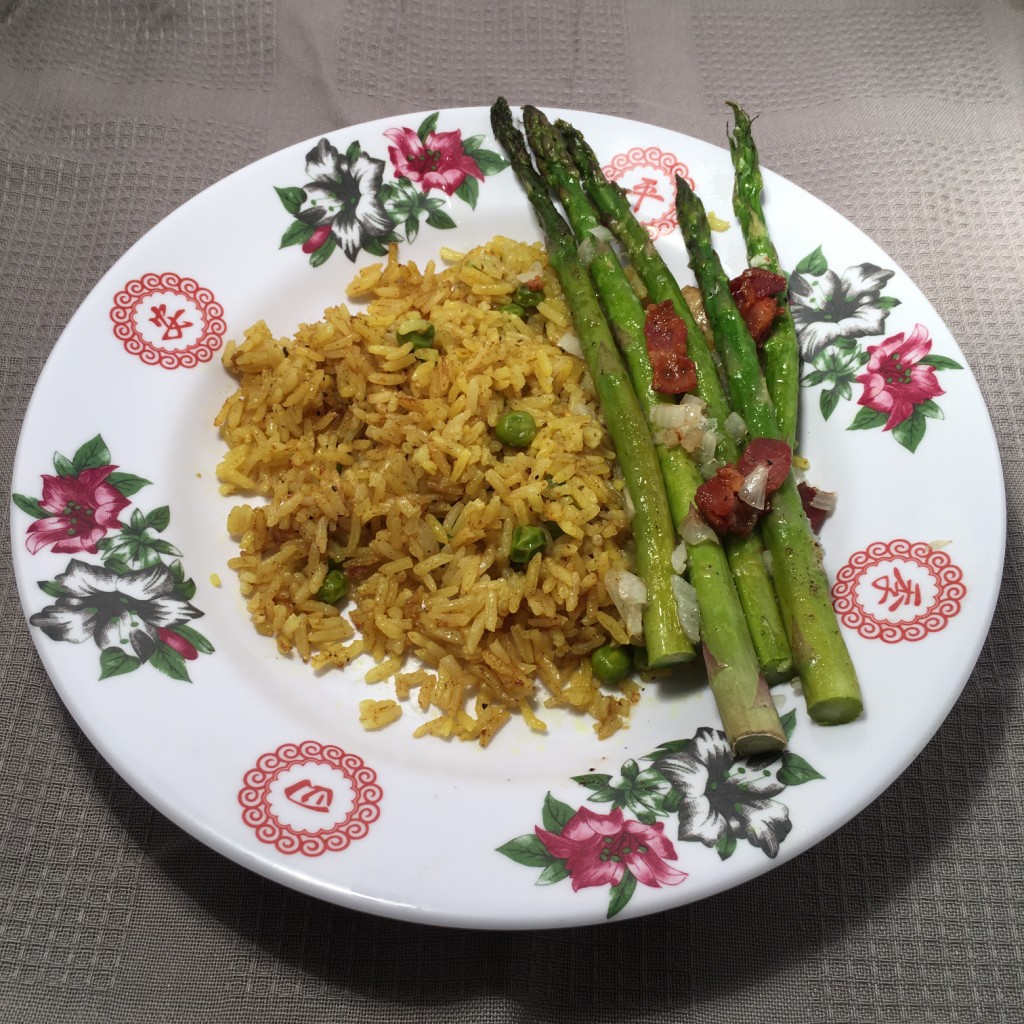 I was very satisfied with the way the asparagus turned out though. The combination of bacon, onion, and parmesan made it very flavorful. 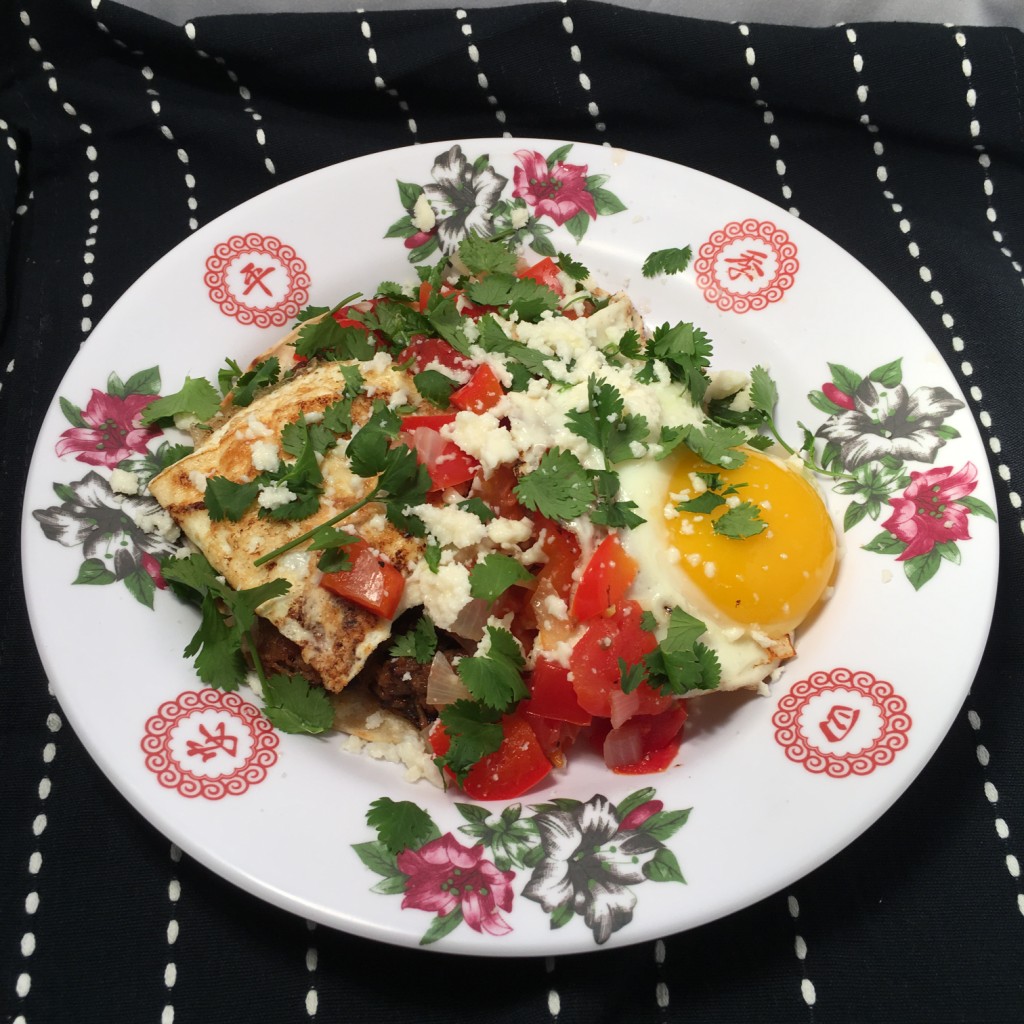 My final dish of the week is Huevos Rancheros, which I was happy to stumble upon a recipe for it since it's probably my favorite brunch dish. Now I personally hate the idea of brunch. You take two perfectly good meals and squash them into one meal, and then get charged way more than you should be charged for either meal. Why would I ever choose to eat one meal over two meals? I've been to a lot of hipster brunch places, and they all feel exactly the same. They serve pancakes, chicken and waffles, and a bunch of random things with an egg on top. And then they try to get you to buy alcohol to make the meal even more extravagant.

But having brunch at home? That's a much better idea. Of course, I didn't make these for brunch. I ate these for breakfast and still had lunch later. 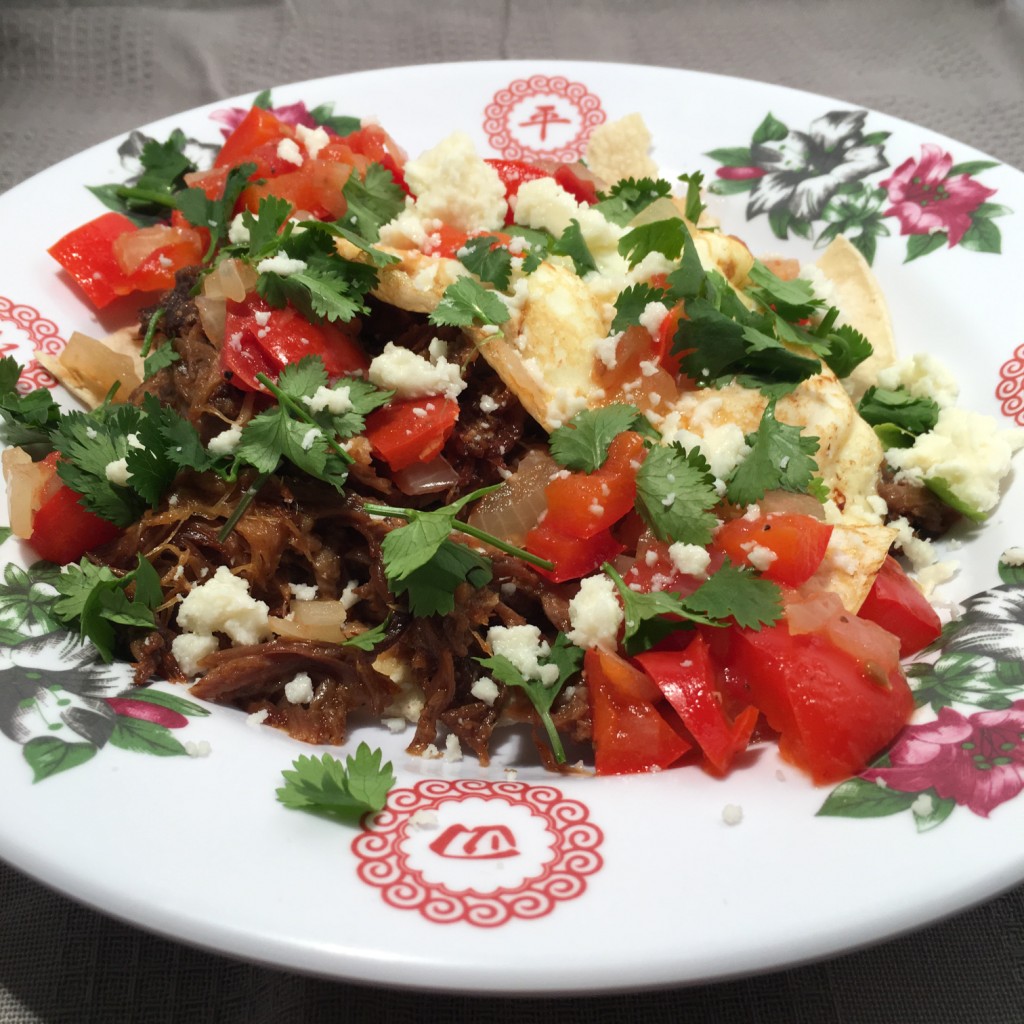 These Huevos Rancheros were okay, but I think the recipe could use a lot of tweaks. The salsa has way too much water, so I would cut that in half. It could also use some more salt and maybe some other spices. I just found it lacking. I also think two eggs is too much. There are plenty of days where I only eat two eggs for breakfast, so having that plus a bunch of other stuff is overkill. The recipe just says to arrange two tortillas on a plate, but I think it's better to first make sure the tortilla is toasted and crispy, and then break it up into nacho sized pieces.

I also substituted the refried beans for some pulled pork that had been sitting in my freezer for a while. Having to use three pans to cook breakfast is a bit much so I wanted to take whatever shortcuts I could. But...I guess this is supposed to be a brunch recipe. And brunch is fancy. 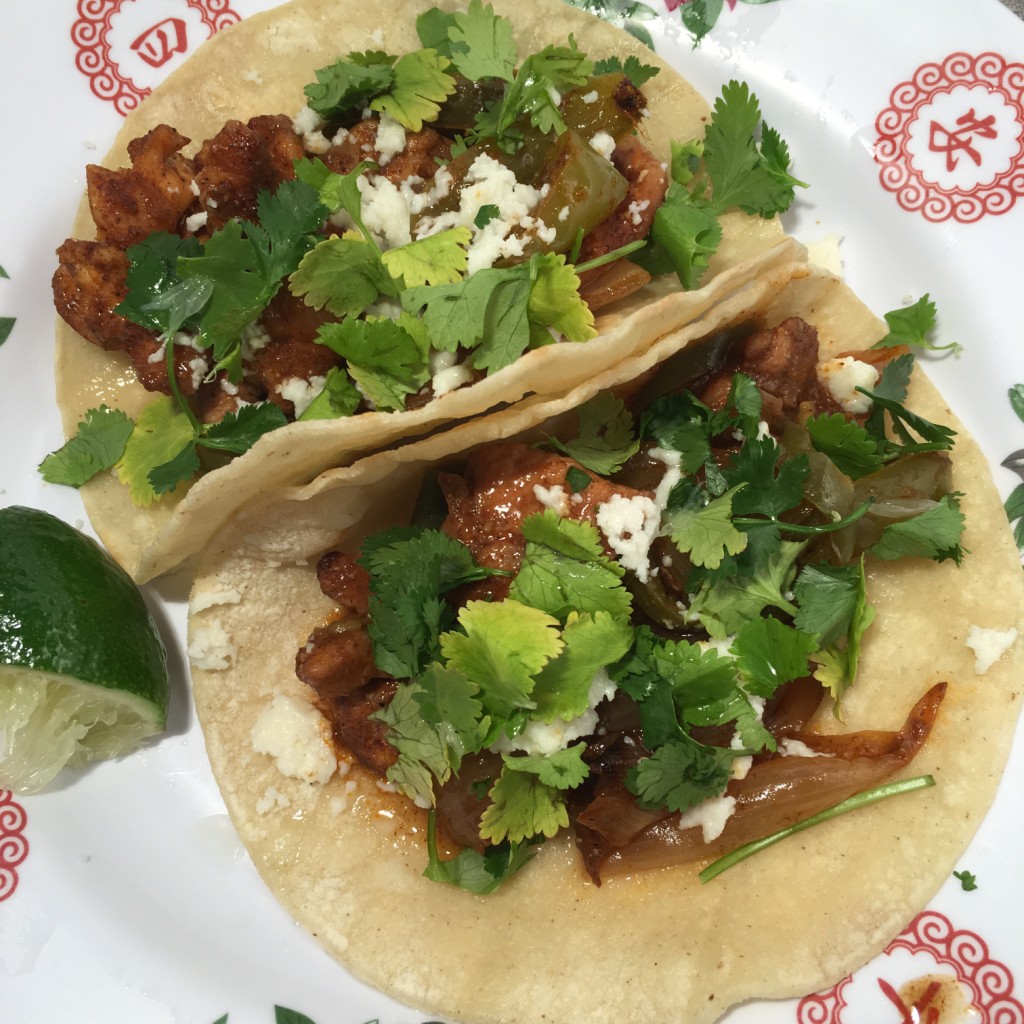 Oh, also I just really wanted to post a picture of more fajitas since I had this two more times this past week. This time I toasted the tortillas on the pan and threw some cheese on top which made them even better.

We just forget to take multiple pictures of the meals we make. Or I'm stuck by myself and have to take a picture with my phone. 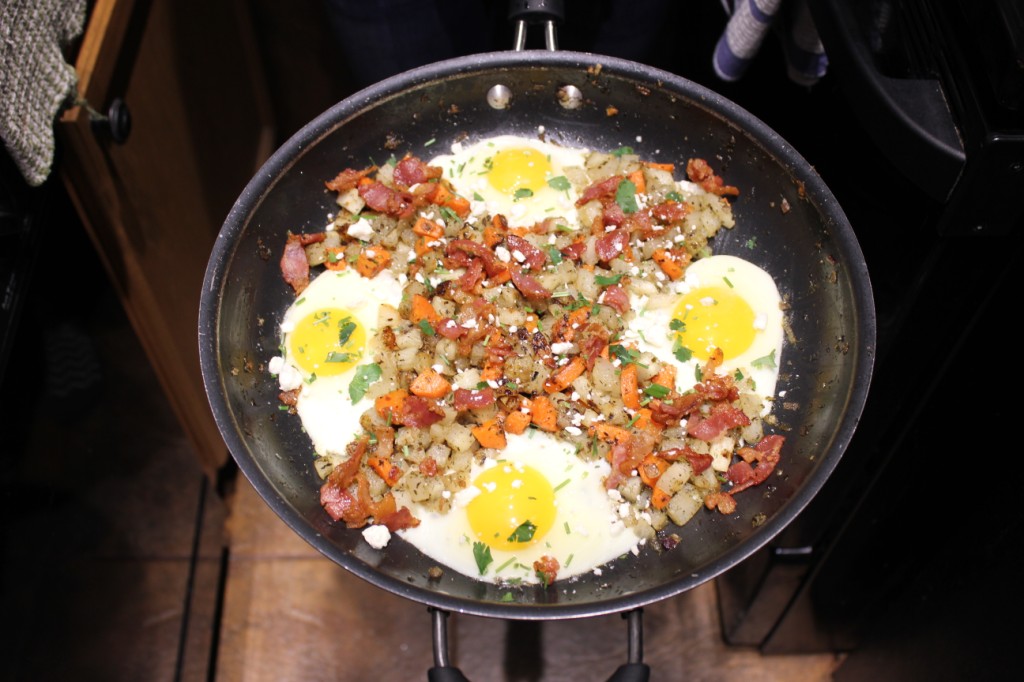 I totally forgot about this in my last Odds 'n Ends post! I had a turnip and I had no idea how to use it, but I saw an egg hash recipe, and I love egg hash. We added bacon and crumbled feta cheese on top which added some extra flavor. All of the turnip recipes I looked at used it like a potato, but I must say, it tastes nothing like a potato. 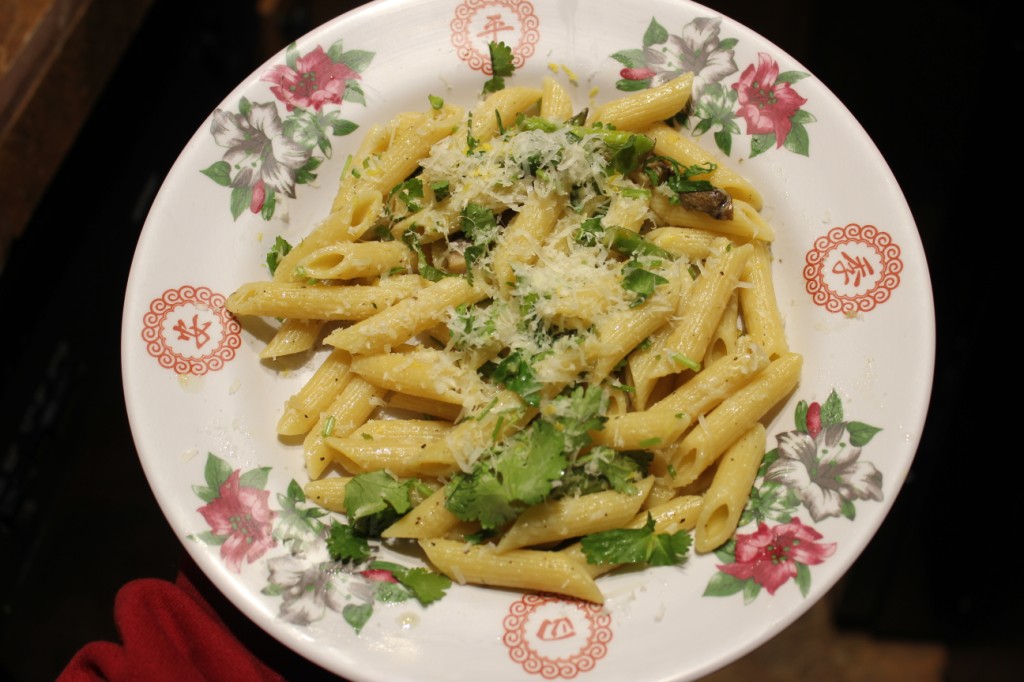 We needed a really quick meal for a Friday night since we had plans to play a game with our cousins. I almost said that we should just get food from a local restaurant, but making pasta is cheaper and faster. I had these really dinky looking asparagus from Aldi, so I didn't even bother steaming them, and I just sauteed them for a couple of minutes. I also added mushrooms, which you really can't see in the picture either. 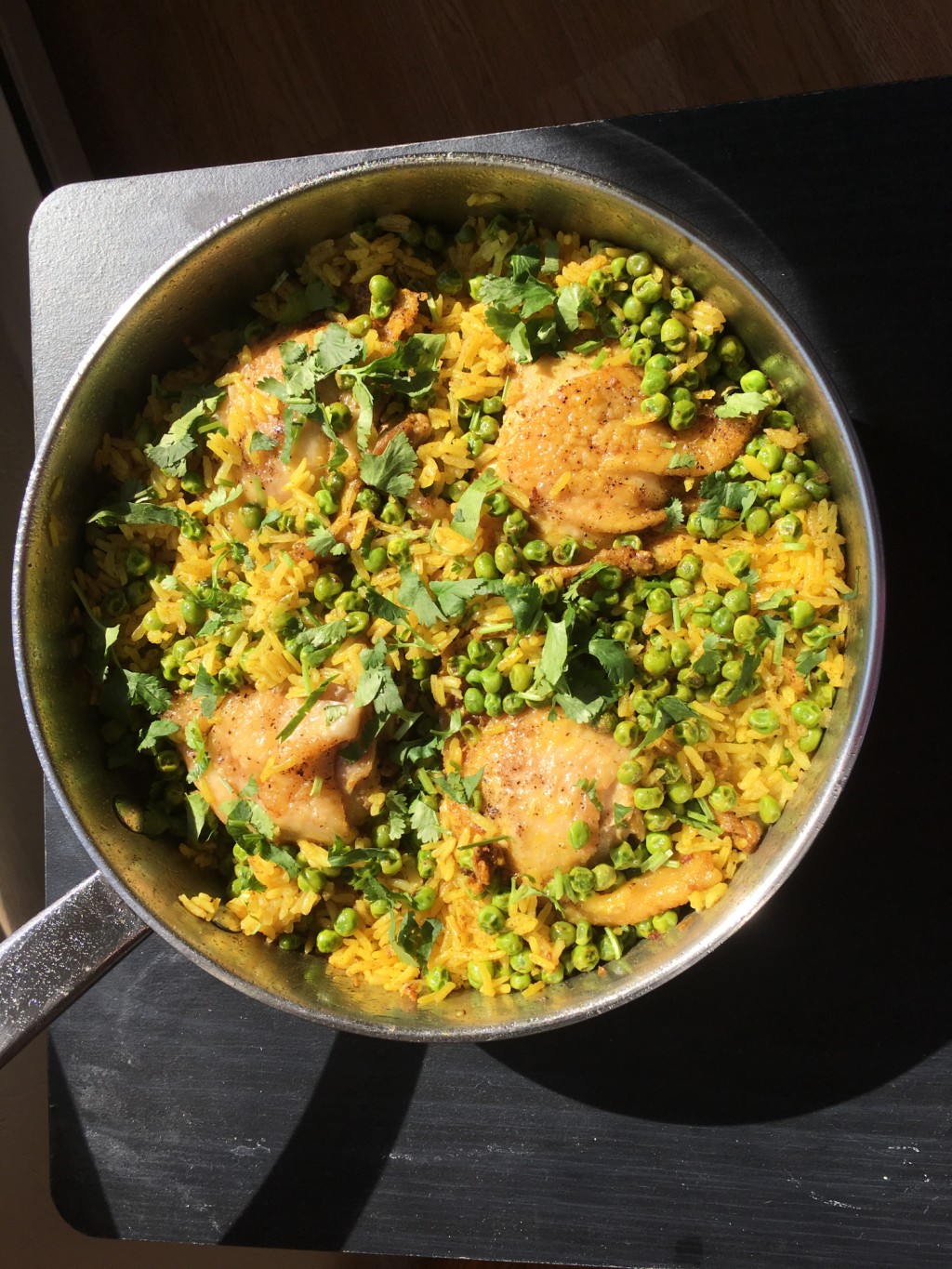 This might actually be the very first recipe I ever tried from Budget Bytes. It was delicious the first time I made it, and it's become one of my really simple go to meals. This is the first time I made it with bone-in, skin-on chicken thighs, though. I normally buy boneless, skinless because I'm lazy, but I'm trying to save money so I'm buying whatever meat is on sale. These chicken thighs were only $0.69/lb!