How can I be sad when I have breakfast, lunch, and dinner?
Recent Posts | Read from the beginning | About
Showing all posts filed under: weekly review
<< Previous

Last week I showed you what was in the PERISHABLE section of my whiteboard. This week I'll expand that and also show you the PANTRY. 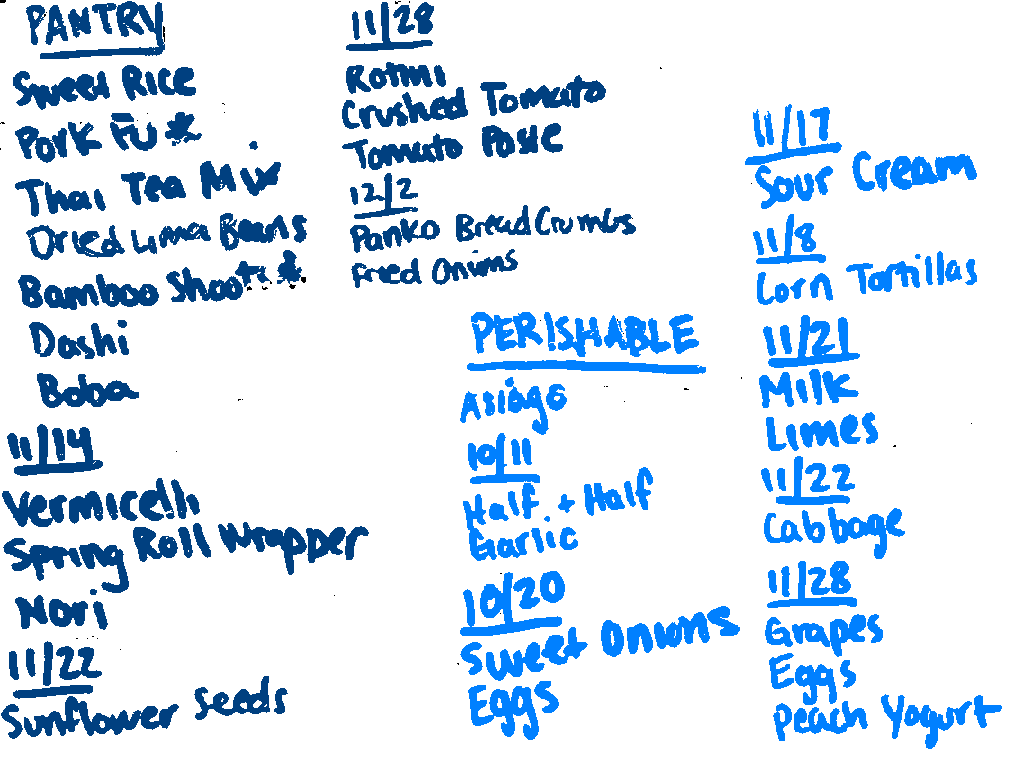 You see how some of the items aren't underneath a date? That means they're so old, I've forgotten when I actually bought them. And that can of bamboo shoots? I think it's been expired for a while. My go-to recipe for using up bamboo is curry, so I decided to put green chicken curry on my list of dishes for the week.

Obviously, that means I need to go to the Asian store to buy green curry paste. And since I've got that on my list, why not just make it a full week of Asian food? Sweet rice (sticky rice) is at the top of my PANTRY section, and the reason I bought that in the first place was to make Sticky Rice with Chinese Sausage. But, the last time I made it, I didn't feel like actually opening that new bag of rice, so I just used my normal Jasmine rice. And that bag of sweet rice has been sitting in a cabinet, unopened, ever since.

For my third dish, I looked up noodle soup recipes on The Woks of Life since it's cold out now, and noodle soup sounds really good. I settled on Udon Noodle Soup with Chicken and Mushrooms since I've made it before and it uses dashi, which I currently have, and shiitake mushrooms, which I'm going to buy anyway for the sticky rice meal.

And that would have settled it, except I looked back at my whiteboard and realized I STILL NEED TO USE UP THE CABBAGE. I was trying to think of other Asian dishes that use cabbage, and my mind went to Singapore noodles. I don't know why my mind associates that with cabbage, but it works since I also have vermicelli noodles.

So, my original shopping plan was to just hit up the Asian store. But then I put together my list and realized I needed to buy chicken, and I just do not think buying chicken from the Asian store is a good idea. I don't even know if the local Asian stores here sell chicken. 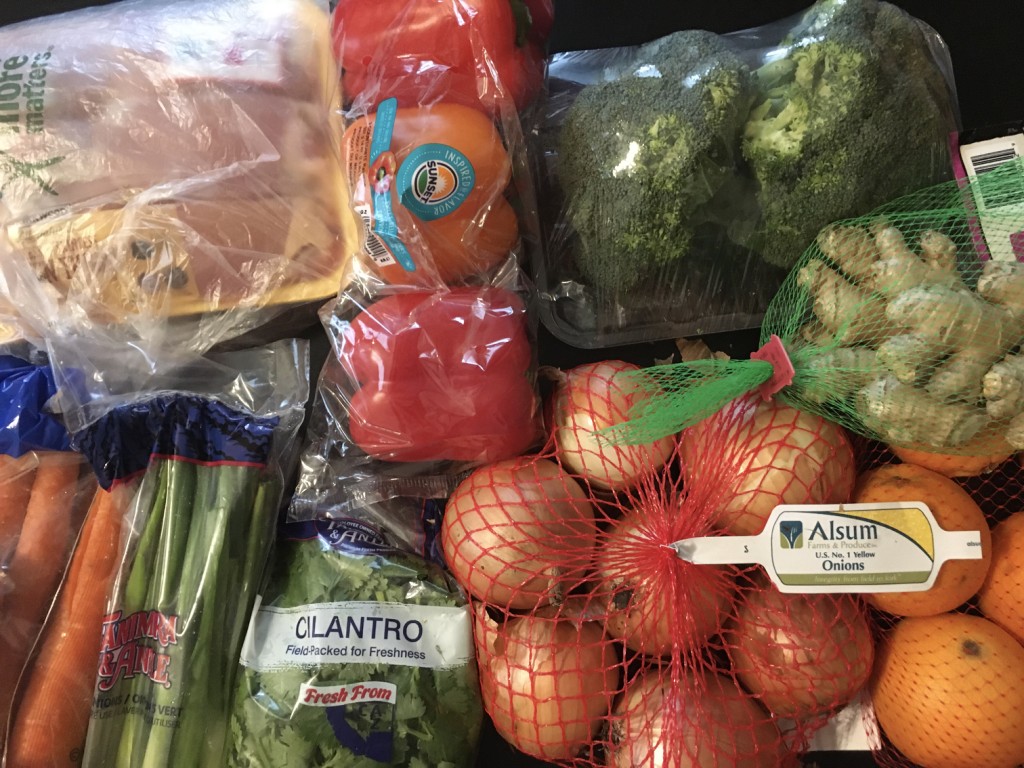 So, I made a trip to Aldi. And look at all that produce! I'm definitely getting my greens this week. And yeah, Aldi sells ginger now. Crazy. 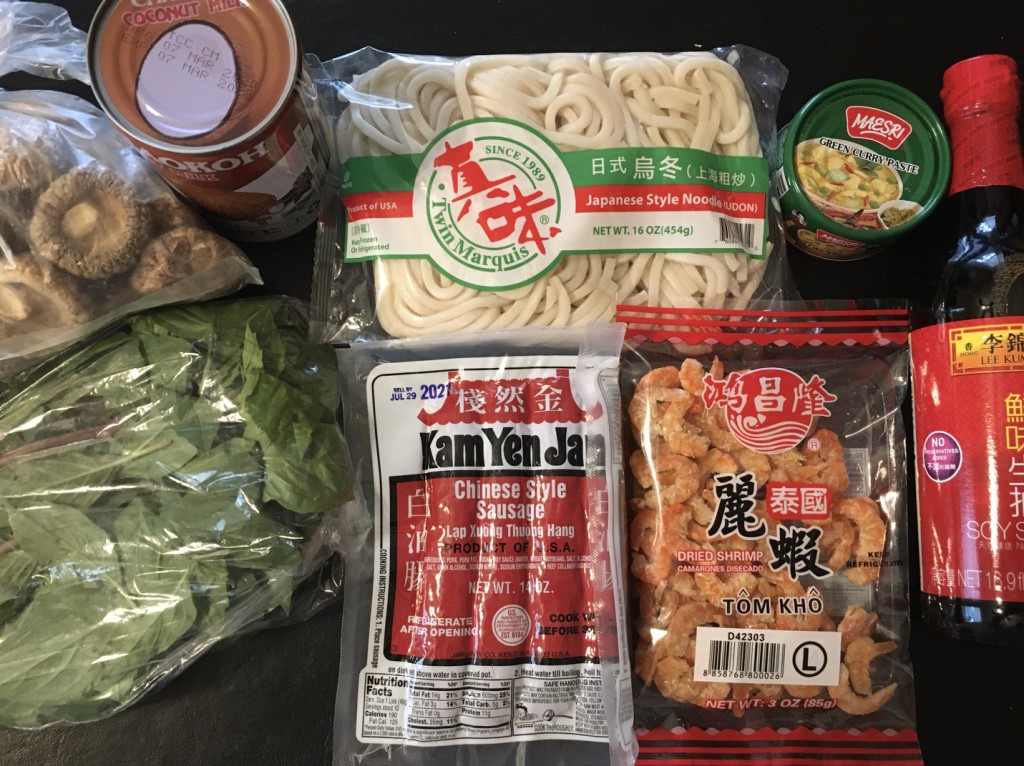 Aldi also sells coconut milk, but I just decided I'd get it at the Asian store instead. I'm not actually sure which option would have been cheaper. The Chinese sausage and dried shrimp are also kinda pricey. In total, I spent $48.37 on my groceries, which is way more than I should spent on food in one week. But, I did have a very light grocery haul last week, and next week will probably also be light. If we're averaging, I'm still under $30/week.

So, it's Saturday now, and I'm sitting here and I cannot remember well enough what I actually ate on Wednesday. Usually I try to write this down the day of, but I just happened to forget to do that on Wednesday. Did I actually skip a meal? Why in the world would I have skipped breakfast? Maybe I snacked on something. Maybe I had beef jerky in the morning.

I did sort of skip lunch on Thursday. I mean I ate food. I was grazing all day. I definitely had a yogurt and some beef jerky and probably something else as well. You'll also notice that I had McDonald's on Friday. I just really wanted those french fries. Unfortunately, there wasn't anything else on the menu I really wanted. But I got a few other things and it was still satisfying enough for a lazy Friday evening.

Ending with an obligatory photo of the pulled pork tacos: 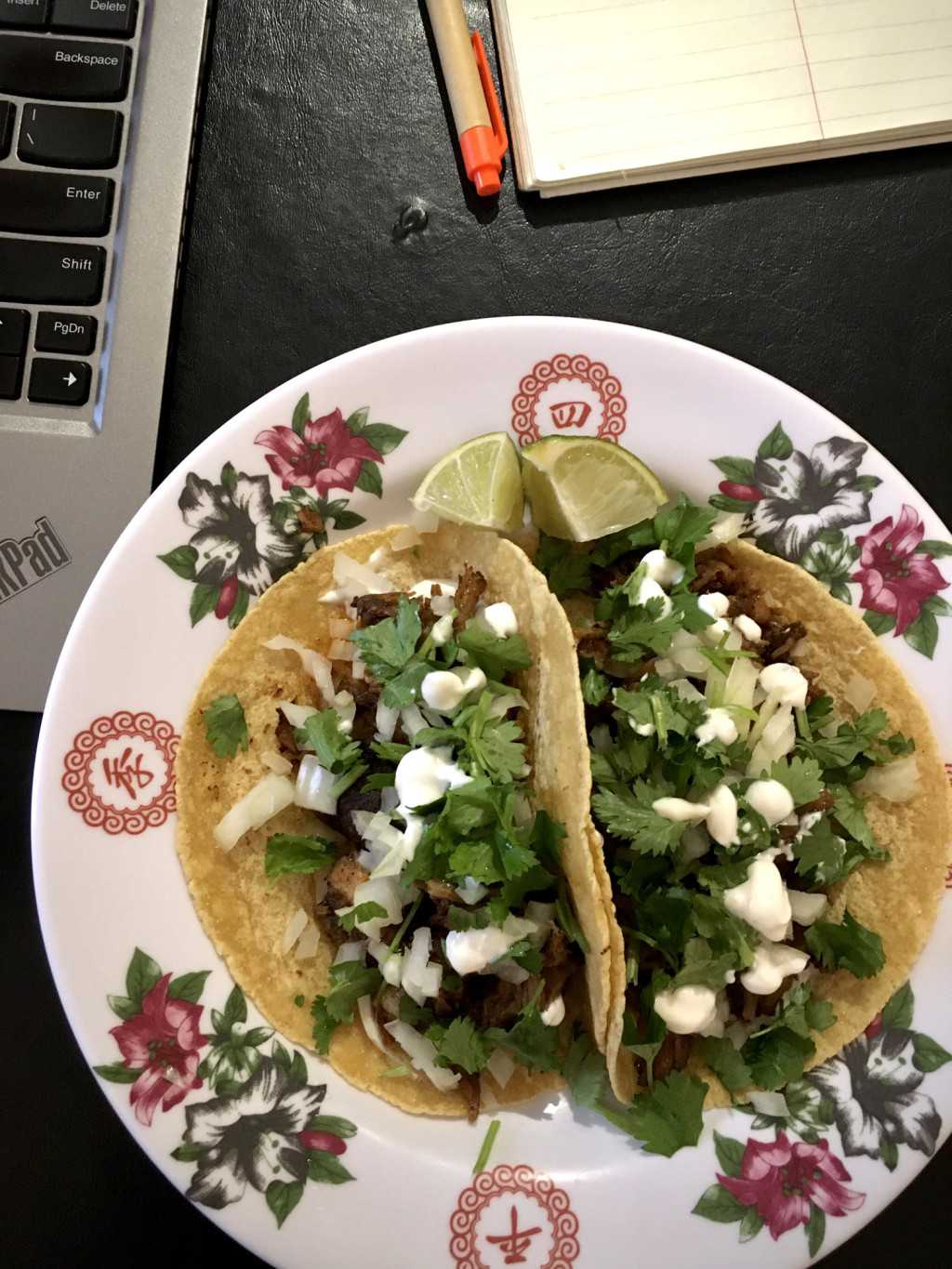